It would seem that nothing could be closer to the truth of suicide than notes and letters left behind by those who kill themselves, but this is not the case; our expectations of how we think people should feel and act facing their own deaths are greater than the reality of what they do and why they do it. Suicide authority Ed Shneidman, for example, in commenting on the disappointing banality of many suicide notes, lets slip his hope, a common one, that the last recorded moments of life will afford a deep or tragic view of dying: ‘Suicide notes,’ he writes, ‘often seem like parodies of the postcards sent home from the Grand Canyon, the catacombs of the pyramids–essentially pro forma, not at all reflecting the grandeur of the scene being described or the depth of the human condition that one might expect to be engendered by the situation.’ Kay Redfield Jamison, from Night Falls Fast


It’s believed that approximately one third of those who attempt suicide leave a note. Pediatrician John Pestian and his research team at Cincinnati Children’s Hospital have collected about 1300 of them toward the purpose of gaining a better understanding of why and how people choose this particular route.

In the following excerpt from an interview with Neil Conan, NPR, Pestian relates what’s been most striking so far:

The most similar thing in the notes that I found in reading was the loss of hope…Secondarily, what you see most often is these practical instructions. Remember to change the tires. Remember to change the oil. I drew a check, but I didn’t put the money in. Please go ahead and make the deposit…Other emotions are, you know, depression, a little bit of anger, not so much hate, but just, again, the whole idea of abandonment, and I just can’t go on any longer. I can’t deal with this any longer.

If you think reading 1300 suicide notes might be depressing…yes it is at times, he admits in a USA Today article. “But in the end, you’re doing whatever you can to help save lives, to help the human condition.” He estimates that in a couple of years this research will produce a tool that enables better assessment of suicidality.

A new ad campaign for Samaritans of Singapore, a suicide hotline, attempts to raise awareness of the signs of severe depression by creating ambigrams, in which what you read and interpret becomes wholly different when you see the same words upside down. Regarding suicidality, this campaign makes the important point that some individuals who in fact are not feeling okay may portray the opposite.

(On the other hand, if you show your willingness to listen, many on the way to attempting suicide do say how they actually feel.)

Three examples from the ad campaign: 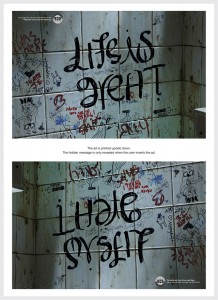 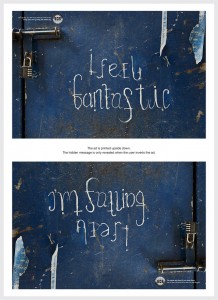 Jason Headley, who created the brief humorous video “It’s Not About the Nail,” (seen in a previous post) has a short film (about 18 minutes) called To Say Goodbye in which a male staff person for “Care-A-Spondence” has the assigned task of writing a suicide note for a female customer.

Don’t watch this film if you’re expecting a happy ending.