The phrase that’s so gay doesn’t hurt everyone. Nor is it even offensive to all lesbian, gay, and bisexual individuals. But it does indeed hurt some. Studies and common sense show that it hurts lots of people, in fact—especially young ones.

The title of a brand new book by psychologist Kevin L. Nadal uses the term “microaggressions,” first coined in 1970 by psychiatrist Chester M. Pierce, to describe those subtle forms of hostility that most LGBT people experience frequently. That’s So Gay!: Microaggressions and the Lesbian, Gay, Bisexual and Transgender Community shows that “(t)hese accumulated experiences are associated with feelings of victimization, suicidal thinking, and higher rates of substance abuse, depression, and other health problems among members of the LGBT community.”

Microaggressions have three different subtypes, as listed by the APA: microassaults, microinsults, and
microinvalidations. “That’s so gay” falls into the category of microinsults—“snubs, gestures, and verbal slights.”

Microassaults “include intentionally calling a person who identified as a sexual or gender minority a derogatory slur, or telling a trans person that they cannot use a multiple-stall restroom or rejecting their entry into a multiple-stall restroom when they try to use one,” and microinvalidations “serve to exclude, negate, or nullify the psychological thoughts, feelings, or experiential reality of certain groups.”

Sam Killermann made the following flowchart to indicate when it’s okay to say “that’s so gay”: 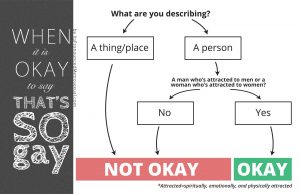 The point being, of course, that it’s usually not okay unless you’re appropriately describing a person with a gay or lesbian orientation.

Thanks to the blog Dorothy Surrenders for the following clip. It’s awesome. LGBT activist Ash Beckham gives a rapid-fire and interesting speech about how the words “so gay” can hurt:

Think Before You Speak is an organization that has developed several PSA’s designed to improve the language used in pertinent instances. Presented below are a few, all brief. First, Wanda Sykes speaks out:

Hilary Duff is the advocate in another ad: