Mother-daughter relationships are featured in the following three nonfiction books that offer many and varied personal accounts about real-life issues.

Hafner writes about her own mother-daughter relationship in light of what happened the year her 77-year-old mom “Helen” (not her real name) moved in with her and her teenage daughter. In a Q & A on her website Hafner states, “Mother Daughter Me asks a central question: what is our obligation to our parents as they age, particularly if those parents gave us a childhood that was far less than ideal?”

Widowed Katie had hoped that Katie and Helen’s bond would improve and that Helen would develop a closeness with her granddaughter. Per the publisher: Instead of “fairy-tale” dreams come true, there were “memories of her parents’ painful divorce, of her mother’s drinking, of dislocating moves back and forth across the country,  and of Katie’s own widowhood and bumpy recovery. Helen, for her part, was also holding difficult issues at bay.”

Kirkus Reviews reports on a crucial decision: “Desperate to bring peace to a feuding household, Hafner engaged the services of a family therapist, and their sessions revealed the extent to which both she and her mother denied the reality of their situation.”

II. Still Here Thinking of You: A Second Chance with Our Mothers by Joan Potter, Susan Hodara, Vicki Adesso, and Lori Toppel (2013)

This memoir arose from a writers’ group addressing mother-daughter relationships. Excerpts of their stories can be found on their website.

Kathleen Reardon, Huff Post Books: “This is storytelling as art. The authors excel in their ability to pull you into their recollections knowing…that you are out there vicariously living through their revelations and your own similar, heartfelt and heartrending reflections.”

III. What My Mother and I Don’t Talk About: Fifteen Writers Break the Silence, an anthology compiled by Michele Filgate (2019)

More from NPR about these stories:

…(O)ur mothers still mess up — sometimes in life-altering ways. It’s about how, despite our love or desperate need for them, we mess things up too. And it’s also about the gut punch that happens when some children are forced to legitimately wonder just how good their mothers’ intentions ever were.

But then, it’s about how much more livable those relationships might be if someone just said those three magical words.

An important conclusion by Kirkus Reviews: “…(S)ome readers may want to have their therapist on speed-dial.”

Sam, the killer, is the one seeking treatment, but by the time this drama is over, nearly everyone in this drama reflects upon past actions and decisions or dies trying. David Bianculli, NPR, regarding The Patient (Hulu series)

Don’t get any ideas, I jokingly told my client (patient) who had just raved about The Patient and was recommending it. If you’ve already seen the series, and I hope you have because this whole post is a load of spoilers, you’re aware that the premise involves a client (patient), Sam (Domhnall Gleeson), who kidnaps and imprisons his therapist, Alan (Steve Carell), hoping to be cured of serial killing.

On a more serious note: “Can Serial Killers Be Rehabilitated?”

Lori Kinsella, J.D., Psy.D., answers this question in a recent Psychology Today article (not connected to The Patient). Check it out. Her main points as expressed upfront:

Serial killers prioritize rewards in decision making. Consequences are of little or no value to serial killers.

Research suggests that brains and neuronal activity of people with psychopathy are different from those of typical people.

In the future, drugs may help rehabilitate psychopaths by controlling neurons in specific brain regions.

A therapeutic letter is something I’ve not only suggested to adult clients many times but have also used personally. In fact, I wrote one for the very same reason many others have—coming out to Mom. Jane Lynch, for example, wrote about this type of letter in her 2011 memoir Happy Accidents. (My own experience was fictionalized in my novel Minding Therapy.)

In Lynch’s case, her therapist suggested writing her parents the fairly standard write-it/don’t-necessarily-send-it/maybe-you-should-show-it-to-me-first kind of letter. Why not send it? There can be some satisfaction just from the process of venting thoughts and feelings and/or preparing what you might actually say in person instead. Why show your therapeutic letter to a trusted someone? In case you get carried away, a more objective eye helps ensure that the prospective target won’t be so turned off they’ll decide not to read your missive.

Coming out, of course, isn’t the only reason you might write a therapeutic letter. Maybe you’ve experienced childhood wounds you’d like to address. Or maybe the problems are more present-centered.

But, Isn’t letter writing a copout? some will ask. Not at all. Letter-writing affords the sender a chance to say what she needs to say without being sidetracked by heated dialogue, and it affords the receiver a chance to think things through before responding. And thus, both parties can work together more effectively on their relationship.

When John F. Evans, EdD, Psychology Today, addressed “transactional writing” he considered all kinds of reasons someone might try to reach another via writing. His five types of letters can all apply to reasons you may be considering writing a letter to your parents.

The ultimate effect of the above process is to allow oneself to feel the type of validation never before received—and possibly not ever achievable in actual interactions.

Are you a prospective client seeking a therapist who won’t impose his or her religion or spirituality on you? Are you a therapist who wouldn’t dream of doing that? If so, take a look at The Secular Therapy Project. You can sign up to find a therapist or you can register to be one of those therapists.

If there isn’t a secular therapist in your geographical area, telehealth therapy may be your best option.

I first found The Secular Therapy Project via a more comprehensive resource called Recovering From Religion, an organization that was founded by psychologist Darrel Ray. From the website:

Many people come to a point that they no longer accept the supernatural explanations for the world around them, or they realize just how much conflict religious belief creates. It can be difficult to leave religion because family and culture put so much pressure on us to stay and pretend to believe the unbelievable. If this is you, we want to help you find your way out. Don’t let people convince you that you just didn’t have ‘enough’ faith, or that you just haven’t found the ‘right’ religion.

A list of religious issues (found on the Recovering from Religion site) you or someone you know might be confronting includes such topics as religious harm, Religious Trauma Syndrome (RTS), Scrupulosity (Religious OCD), cults, wanting to understand a loved one who is nonreligious, and mixed belief couples.

In a blog post, Ray further explains his belief about the importance of separating religion and spirituality from clinical work:

If religion was an important key to mental health, then religion would have solved the problem of mental health 2,000 years ago. Jesus’s approach to mental illness was to cast demons out of a mentally ill person, into a herd of swine, and have the swine jump over a cliff. That was the state of mental health knowledge until secular psychological science came along 150 years ago. Only with the advent of science have we learned how to treat depression through talk therapy and drugs….

The bottom line is this; if religion works, then go to your minister, priest, imam, scientology auditor or guru. If psychotherapy works, then go to a secular psychotherapist trained in evidence based approaches and/or go to a psychiatrist trained in good drug therapy. There is no valid reason to mix these two. Religion had its shot for 3000 years or more. The best it could do was find demons everywhere.

Ray was asked in an interview: What if someone comes to one of these secular therapists and says they’re having doubts about the existence of god, or questioning their faith? How would a good secular therapist handle this kind of client without pushing them to leave the religion? Ray answers: “Cognitive behavioral approach, I would say. That’s what cognitive therapy does. It asks you to consider a rational approach to dealing with your problems. A lot of our therapists are well trained in CBT. A religious person could still perform that kind of therapy, as long as they kept their religion out of it.”

Want to learn more about Ray’s views? Two of Ray’s books are titled Sex and God: How Religion Distorts Sexuality and The God Virus: How Religion Infects Our Lives and Culture.

Former child actor Jennette McCurdy‘s bestselling new memoir I’m Glad My Mom Died has been notable not only for its popularity among readers but also for its title alone. She blatantly admits being happy her mother is dead? Who does that?! 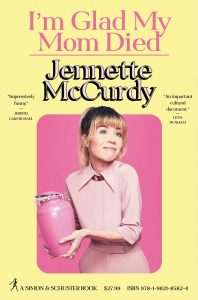 Mary Elizabeth Williams, Salon: “When the book debuted earlier this month [August 2022], it became an instant bestseller and sold out on Amazon. Its success revealed that there is a whole population of survivors who have complicated feelings toward our deceased relatives.”

In the following top quote from the book McCurdy, now 30, contemplates her abusive mom’s death:

I take a longer look at the words on her headstone.
Brave, kind, loyal, sweet, loving, graceful, strong, thoughtful, funny, genuine, hopeful, playful, insightful, and on and on…
Was she, though? Was she any of those things? The words make me angry. I can’t look at them any longer.
Why do we romanticize the dead? Why can’t we be honest about them?

Well, honesty about this is hard, but it does happen. Google the topic. You will definitely find others confessing a lack of sadness over their parents’ deaths.

I can tell you I’m glad my father died. It’s not that he was abusive, it’s that he just wasn’t there throughout my entire life. I didn’t know him and he didn’t know me, so until he died he was already a ghost anyway—one who made my life challenging at times. (Explaining this further might involve a book’s worth of thoughts and feelings.)

It may be much harder for most to admit similar feelings about their Mother, though. That’s just a thing I probably don’t even have to explain.

McCurdy has done a lot of work on herself to get to the place of being able to write I’m Glad My Mom Died. Previously she had developed a one-woman show of the same title; she also does a podcast called Empty Inside. And, ta-da, she goes to therapy.

As the author told the Associated Press, therapy alone wasn’t cutting it, however. Putting together her show and doing her other writing have also been important. “Processing the events that happened in my childhood took so long in therapy. I needed to do so much of that excavating work on my own.”

Which is not to discount her therapy’s impact. Therapy has helped her significantly, for example, with her eating disorders. “…I don’t obsess about food at all. I say this because I want people to know that I do believe it’s possible to not have it haunt you for the rest of your life. I feel great in my recovery. I consider myself recovered. For anybody who might be struggling now, I want them to know it’s possible to recover.”

Are you grappling with the death of an abusive or toxic parent? Dr. Alejandra Vasquez, JD, CT, Certified Grief Counselor, has a pertinent article at Join Cake.