As author Harlan Coban has stated about organizational psychologist Adam Grant‘s new book Think Again: The Power of Knowing What You Don’t Know, “having an open mind might be a more valuable skill than traditional intelligence.”

From Grant’s publisher: “Intelligence is usually seen as the ability to think and learn, but in a rapidly changing world, there’s another set of cognitive skills that might matter more: the ability to rethink and unlearn.”

His aim is to ‘explore how rethinking happens,’ how we change our minds, how we persuade others, and how we build cultures of lifelong learning. ‘This book is an invitation to let go of knowledge and opinions that are no longer serving you well,’ he writes, ‘and to anchor your sense of self in flexibility rather than consistency.’ 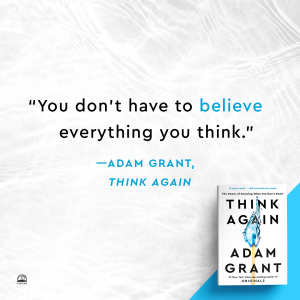 Grant explains the gist of his thoughts and research that went into this book in a recent New York Times article. “Don’t try to change someone else’s mind. Instead, help them find their own motivation to change.” An apt summary of what he’s learned about changing someone’s mind:

…(O)ur first impulse is to preach about why we’re right and prosecute them for being wrong. Yet experiments show that preaching and prosecuting typically backfire — and what doesn’t sway people may strengthen their beliefs. Much as a vaccine inoculates the physical immune system against a virus, the act of resistance fortifies the psychological immune system. Refuting a point of view produces antibodies against future attempts at influence, making people more certain of their own opinions and more ready to rebut alternatives….

I no longer believe it’s my place to change anyone’s mind. All I can do is try to understand their thinking and ask if they’re open to some rethinking. The rest is up to them.

The higher your IQ score, the more likely you are to fall for stereotypes. Grant explains that those with a higher IQ are faster at recognizing patterns. He suggests that the smarter you are, the more you might struggle to update your beliefs.

Those who are intellectually curious and open to new ideas are more successful.

People who score lower on emotional intelligence (EQ) tests are more likely to overestimate their skills and dismiss their EQ scores as inaccurate or irrelevant.

Rather than engaging in our usual identities of preacher, prosecutor, and politician when dealing with our beliefs, Grant’s conclusion is that we need to use more of our scientist mode. As summarized by Gotian, “Instead of starting with the answers, lead with questions, and see where the inquiry leads.”

Interested in a quiz about your own thinking tendencies? Try Grant’s Think Again quiz here.