Transgender issues are core to two new books, presented below.

I. The Gender Book

Although creators Hunter Rook, Jay Mays, and Robin Mack are still seeking funding for their project, they are generously offering a rough-draft version of The Gender Book for free on their site.

They hope, among other things,  to decrease the isolation young people often feel regarding these issues, educate health professionals and therapists, and open up more dialogue.

Page by page, The Gender Book includes easy-to-read and colorful graphics regarding such topics as gender-related terms, gender misconceptions, and much more…

For example, there’s a gender identity game of sorts: 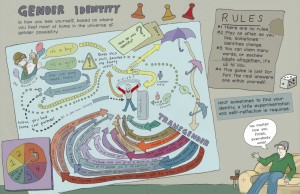 Another page is the Transgender Umbrella. Find out where you fit: 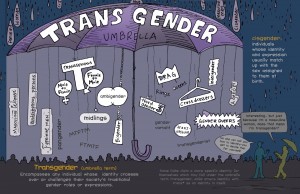 When in doubt, we erred on the side of inclusion…Ultimately, we had to make some choices that not everyone can agree with 100-percent, but hopefully everyone can read without cringing. To help broaden our perspective, we enlisted everyone we could find to co-author with us through short, fun surveys. You can find their responses all throughout the book. That lets us show multiple opinions without having to say ‘this is right’ and ‘this is wrong.’ It’s more about sharing the individual’s truths as best we can.

When you delve into The Gender Book’s website, you’ll find lots more.

II. Modern Fairy Tales That Include Some Trans (and Gay) Twists

Tim Manley has been working on updating some fairy tales, and now you can see them all in his new book Alice in Tumblr-land: And Other Fairy Tales for a New Generation. States the publisher:

The Ugly Duckling still feels gross compared to everyone else, but now she’s got Instagram, and there’s this one filter that makes her look awesome. Cinderella swaps her glass slippers for Crocs. The Tortoise and the Hare Facebook stalk each other. Goldilocks goes gluten free. And Peter Pan finally has to grow up and get a job, or at least start paying rent.

Here are more than one hundred fairy tales, illustrated and re-imagined for today. Instead of fairy godmothers, there’s Siri. And rather than big bad wolves, there are creepy dudes on OkCupid. In our brave new world of social networking, YouTube, and texting, fairy tales can once again lead us to ‘happily ever after’—and have us laughing all the way.

And Mulan? By the end of the tale she’s transitioned to male. Google, in fact, “Mulan transgender” and you’ll find that many fans have thought (or wished) it all along.